Amada Senior Care’s ongoing support of veterans extends far beyond facilitating access for them to the full extent of their VA benefits. Where there is a need for help, we believe there is a need for us. In this post, retired U.S. Army Captain and Special Forces Team Leader Ronald Fry reaches out to help support his friend: former Afghan interpreter Walid Shaheed, now living in the U.S. with his wife and four children.

He lives in Honeoye, New York, 33 miles south of Rochester, the town renamed Bedford Falls for location shooting in “It’s a Wonderful Life.” For former Afghan interpreter Walid Shaheed, life in Honeoye, which became his home in 2021, clearly is a version of wonderful, given the ravages of war and subsequent death threats he and his family endured as a result of his job. But for the Shaheed family, in Honeoye there’s still something missing. After all he’s suffered, Walid’s efforts to support his family are compromised by transportation.

Backstory: Ron and Walid Meet in ‘The Hardest Place’ 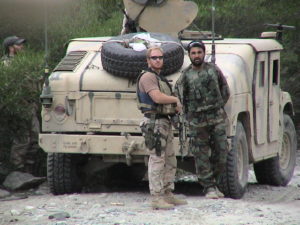 Ron and Walid met in Afghanistan’s Pech Valley, aka “The Hardest Place.”

“In 2003, ODA (Operational Detachment Alpha) 936—codename Hammerhead Six—was assigned to Asadabad, capital city of Kunar province,” said U.S. Army Captain and Special Forces Team Leader Ronald Fry, to whom Walid Shaheed would be assigned as an interpreter. A team was sent into the beleaguered Pech Valley to live, build a camp, and raise an army of local soldiers as at that time it was the only place in Afghanistan where Al Qaeda maintained an existing presence.

“Walid had been working with the Americans since 2001, so when Al Qaeda and the Taliban came in, he was one of the first interpreters in the eastern part of the country—first with the CIA, then another Special Forces team, then with our team,” Fry explained, emphasizing the invaluable contribution Walid made to the United States. Neither speaking Pashto nor familiar with customs that can significantly impact the results of interactions between soldiers, elders, and other locals, Fry was entirely dependent on Shaheed to guide him in his work.

“In many cases, there was a question behind a question,” Fry recalled. “Had it not been for Walid’s immersion in the culture, the outcome of our mission would have been very different.”

In fact, Fry credits his interpreter with the 100 percent survival rate of every individual connected with the mission, including 130 U.S.-trained Afghan soldiers and 40 Marines assigned to the unit for security purposes. In his book The Hardest Place: The American Military Adrift in the Pech Valley, investigative reporter Wesley Morgan writes Hammerhead Six was the only team in the area that had real success—surviving intact—because they understood the culture of the people best. “He talks about us in the book. Navigating that immensely difficult human terrain was because of Walid,” Fry said. 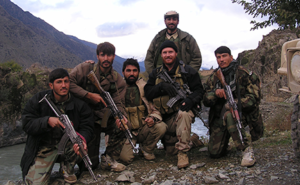 Ron credits Walid with the 100 percent survival rate of everyone connected with the mission.

In July 2004, Hammerhead Six left the Pech Valley. Without social media used the way it is today, Fry and Shaheed lost contact. Writing of his experiences in his 2017 book Hammerhead Six: How Green Berets Waged an Unconventional War Against the Taliban to Win in Afghanistan’s Deadly Pech Valley, Fry’s publisher insisted on a website and Facebook page—something daunting for the social media-shy Army Captain. Nevertheless, Fry did it—something that would prove to be a lifeline, connecting him with his interpreter once again when the latter found him in what had become a desperate search.

Under a hail of Taliban death threats to interpreters and their families, a program had been started to issue exit visas. Working at interpreting jobs until roughly 2007, Shaheed then moved to Kabul and obtained an MBA, also working for the Afghan government. “The Taliban knew who he was, but not where he was,” Fry said. At that time, State Department visa requirements included a letter from a human resources department given that most interpreters worked for big American Contractors. That wasn’t the case for Shaheed. To get him and his family out of Afghanistan, he was tasked with obtaining a letter from a commander for whom he had worked. Fry immediately obliged.

Despite Fry’s letter, the State Department made it almost impossible to get a visa, with thousands in the queue. Wait time was routinely 18 to 36 months. Fry wrote to his congressman and had others write letters on Shaheed’s behalf, but the needle failed to move. “When the Taliban took over Kabul, there was no U.S. embassy—no U.S. government or Afghan government working on the visas. And the Taliban started hunting down people who were trying to get these visas to leave,” Fry said.

In an intense seven- to 10-day period in August, 2021, just before the U.S. totally vacated Afghanistan, Marines were at the airport working to evacuate Afghan citizens who held visas, though they were told not to come until they were actually called. In the chaos, people without visas also showed up and were loaded on planes despite their status by the military. At that point, Fry and high-ranking members of the Army and Marines phoned members of Congress and some NGOs to get Walid and his family out. When the call finally came, the family barely made it to the airport amidst Taliban street fighting. 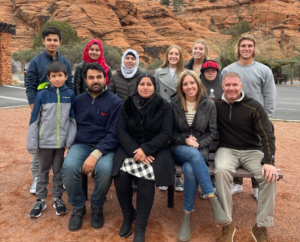 The Shaheed Family seeing Zion National Park during visit with the family of US Army Capt. (retired) Ronald Fry.

“Their older son got separated and trapped in the crowd,” Fry said, and though the rest of the family was pushed through security and the gate closed behind them, his mother—Walid’s wife Baryali—refused to get on the plane without him. The Marines went back and found the 16-year-old, and the family was flown to Joint Base McGuire-Dix-Lakehurst, a New Jersey resettlement camp. In November 2021, they were relocated to Honeoye by Rochester, New York-based Keeping Our Promise Inc.

“Two days after he left, Walid’s parents, who still live in Afghanistan, got a visit from the Taliban. They had a list with his name on it,” said Fry. Fry and his son flew out to Honeoye from their Utah home to help the family settle into their new apartment and town. “Walid hugged me and held onto me for a long time,” Fry said of the reunion. “It’s a humble apartment but he was finally home.”

A Ride to the Top

Despite his MBA, advanced language and interpreting skills, his work with the U.S. military, CIA, and other Special Forces, and his overall service to America that nearly cost him his life, Shaheed has had to start over. He found a job in purchasing and procurement for a charity, but it is 40 miles round trip each day from his apartment. He must rely on others for rides—something that challenges his strong sense of independence—and as the family lives in the snow belt, simple things like grocery shopping and errands six months of the year are a considerable challenge.

To buy a vehicle for the family, Fry has started a *spotfund crowdfunding page for the Shaheed family to raise money. He can also be reached at ronaldfry01@gmail.com.

“He nearly lost his life for us,” Fry said. “I want to make sure he has a wonderful life here.”

“A Special Forces Veteran’s Quest for Ally to Live ‘A Wonderful Life,’” was written by Beth Herman, Amada blog contributor. 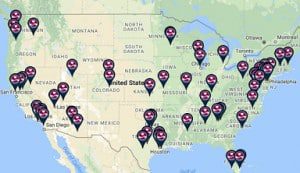